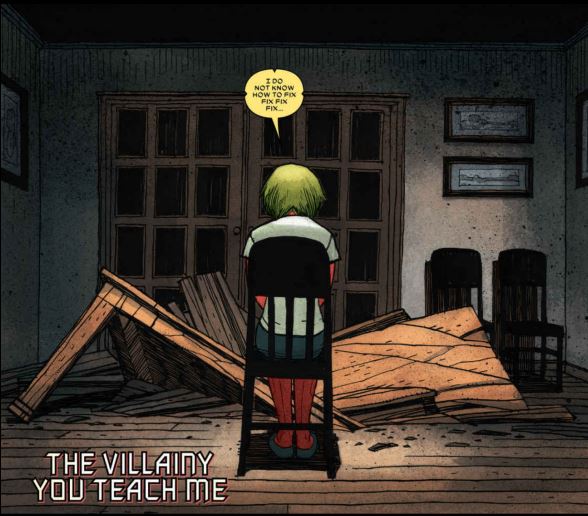 “…mental illness in general is the price we have to pay for being human…” Anton Boisen, Religion in Crisis and Custom

“Am I normal?” Vin, The Vision

I’m a comics guy, but not a huge comics guy.  When I first read that Marvel was creating a limited series focusing solely on one of their more B-list heroes, the  synthezoid Avenger known as the Vision, I was puzzled. When it was regarded as one of 2016’s best, I still didn’t pay it much attention. After finally reading it through, I can attest to how wrong I was.

The Vision, by the creative team of Tom King, Gabriel Hernandez-Walta, Jordie Bellaire, and Clayton Cowles, is a masterpiece. It is more akin to Death of a Salesman than it is to Avengers vs X-Men or most any other superhero fist-to-face comic out there. It has a great deal to say about a great deal of things, much more than I can unpack in one post. One thing that spoke to me though, was what it had to say about the inescapability of sin and evil.

The Vision focuses on its titular hero and the family he has created: his wife Virginia and their twin teenage children Vin and Viv. In an effort to embrace and develop his own humanity, he creates a typical American family, leaves Avengers tower and moves to suburban Arlington. As any normal parent would do, he enrolls the kids in high school. Virginia tries to learn piano and tends to the home. Vision exchanges his cape for business wear, unless he’s working with the Avengers. The Visions of 616 Hickory Branch Lane are a calculatedly average, normal American family. Yet their efforts to attain and maintain normality lead to tragedy of Shakespearean proportions (The Merchant of Venice is featured very prominently in the story).

The tragedies the Visions endure are due to their attempts to be who they are as well as fit in with those who are drastically unlike them. The Visions can alter their molecular density to become as dense as a diamond or phase through walls. Their metallic skin is bright red. They shoot lasers from gems in their heads. They can fly. They cannot not stand out. Yet Vision and his wife try their hardest to blend in as suburbanites and encourage their children to do the same.

It’s these attempts at normalcy though that are the foundation for their fall. Early on in the series the family is attacked by the villain the Grim Reaper, the brother of the hero Wonder Man, whose brain waves served as the template for Vision’s own (as with most things comic-book, it’s complicated).  He accuses the family  of being “frauds” and “imposters” because they are an artificial family made of artificial beings. In the attack Viv is impaled, and in her defensive Virginia kills the Reaper. It is this tragedy and her cover up of it that starts the downward trajectory of the family and their story.

Sin affects the Visions through both internal and external avenues in the story. They live in a sinful system of prejudice, bigotry and resentment. The family is mocked and targeted in the school and community. They are attacked by Grim Reaper solely for being who they are. This attack in turn provokes sin in the Visions. Virginia can’t cope with lying to Vision and starts to malfunction, smashing things in the home. Vin attacks a student at school after being harassed about his sister who is literally in pieces. By the end of the series Virginia unwittingly is involved in the death of Viv’s  synthezoid crush, Vin has been accidentally killed, Vision has attacked the entire Avengers team in order to kill Vin’s killer, and Virginia herself has died by her own hand after killing the killer so Vision doesn’t have to take the blame. 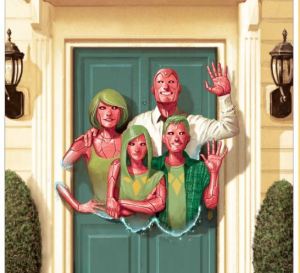 This would be a tragedy in any human family, even a heroic human family. Yet with the Visions it feels even more tragic because their non-human status would make it appear that they would be more likely to rise above the evil and hatred leveled against them. They are clearly emotional beings,  but because they are not human – better than human actually – one would expect them to be able to control those emotions and their consequences better than us broken beings. Their attempts at justice reveal how murky their morality is and how painfully human they really are.

Shylock’s soliloquy in The Merchant of Venice is very prominent in the story, serving not only to foreshadow the greater evils to come in the book but to give context to the downfall of the Visions themselves. In Act III Shylock states, “If a Christian wrong a Jew, what should his sufferance be by Christian example? Why, revenge. The villainy you teach me I will execute, and it shall go hard but I will better the instruction.” Shylock sees the equal humanity of Christian and Jew (the oppressed minority in The Merchant), but also seeks to escalate retributive justice because of prior inequality. Shylock is at once a sympathetic figure as well as an unsympathetic one. We see that he has been afflicted by evil and that his seeking of justice is right, but rather than rise above evil he instead doubles down on it. We see this conflict at work, though more sympathetically so, in the Visions as they react to the wrongs against them in naively wrong ways.

The fatal flaw of the Vision in creating his family and trying to live a normal life is that that he did not see how much evil there was in normal life. The Vision, he recounts to himself, has saved the world 37 times. Yet he cannot protect his family, or even himself, from human nature. The Vision acts as a failed messianic figure in this respect. He has godlike powers and empties himself of their prestige to dwell among men as one of them. In that respect he is Christlike. In his participation with humanity though, he proves to be vulnerable to the same evil and sins that humanity itself is plagued by precisely because of sinful human nature. Perhaps his achilles heel is the belief that because he has saved the world 37 times he will be somehow immune to the everyday evil that affects himself and his family. Or perhaps it’s that the everyday evil he faces, and that we all face, simply cannot be defeated by punching it really hard.

One small feature in the story that becomes significant is the flying water vase given to the Visions by the Silver Surfer. The vase is invisible and seems to hold its water suspended in mid air, though we see no flowers in it. We are later told by the narrator that the vases are always empty because the material of the vase causes the water to become poisonous and corrosive to most everything. The narrator concludes, “The mystery then is not why they are empty, but why anyone would ever make such a vase.” Why create something that works against what it was designed to do? This mirrors the tragedy of humanity, made in the image of God and yet seemingly by its own nature unable to reflect that image. It also hints at a significant moral, philosophical and theological question: why would God create something beautiful only to let it fall into sin and corruption? If God knew Adam and Eve would sin and bring death into the world, why even create them?

Vin’s question to Viv “Am I normal?” also carries significance through the arc of the story. The answer to Vin’s question is both yes and no. The Visions are in many ways as far from normal people as they can be, and yet in their response to sin with sin we see them at their most “normal” and most human. As they try within themselves to fix what has been broken, they find they can’t. The ultimate tragedy of the Visions is that even near-godlike heroes aren’t immune from the effects of sin and human nature, both impressed upon them and expressed by them.

One thought on “Sidebar: Everyday Evil and the Visions of 616 Hickory Branch Lane”