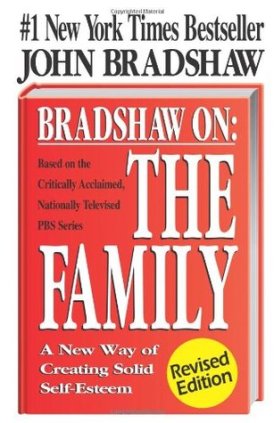 Bradshaw On: The Family comes on the heels of the social upheaval of the late ’60’s and the cultural narcissism of ’70’s America. Popular culture was trying hard to emancipate itself from traditional societal and religious norms. This cultural zeitgeist runs through this book and therefore may turn some off. However don’t disregard it as mere “psychobabble”; it has ideas well worth considering.

In this book as well as the PBS series (available on YouTube) Bradshaw compares the family to a mobile, where the system is constantly trying to maintain balance and stasis. Touch one part of a mobile and the whole mobile moves in response in order to maintain balance. While this system can lead to and sustain harmony, it can also maintain “sick” systems where dysfunction and distress feed down through the system from generation to generation.

Bradshaw also significantly addressed how addiction impacts the family system. Addiction to Bradshaw includes not only physical and chemical addiction, such as alcoholism, but to emotional addiction. Bradshaw speaks of the “rageaholic”, for example, as one who deals with members of the family primarily through anger and degeneration as a way of maintaining control and authority. The family members learn to cope with this anger through appeasement, distancing, internalizing and other mechanisms that can lead to poor self esteem and other problems.

Bradshaw built his model of psychology and therapy on the basis of the family as the model and maker of the individual self. Every child is born into the family with the same needs: nurture, love, sense of self worth, safety and so on. However families meet these needs in different ways, some of which are helpful and others toxic. As we grow, we learn a sense of self based on what is mirrored by those most close to us. If needs are unmet or not met healthily (and they rarely are) our “inner child” continues to long for them and meet them in other ways. This may involve overcompensating with good behavior and overachievement (the “golden child”) or emotional numbing through alcohol and drugs.

from John Bradshaw, “Bradshaw On: The Family”

The difficulty in this situation is that when one person tries to change their reaction to the system in a positive way, the entire system may work to counter him in order to maintain the balance of the system. This resistance to change may greatly impact not only the person trying to change but everyone else in the system as well, which may cause guilt and shame on top of the guilt imposed by simply being a part of an alcoholic or rageaholic family. This is the heart of the “toxic shame” which Bradshaw addresses in this book and others as well.

Here is where I find this material of the most help to chaplains. I have often found that individuals, myself included, have been shaped by shame in their lives. Often this shame is handed down: from the family, from culture, from teachers, and from religion. This shame rarely shows itself as such though. It often seems like an iceberg, where the glimpse of ice breaking the surface of the water gives the slightest hint at the tremendous mass underneath. I remember a former patient I had who would talk and talk about her life, but then retreat back by saying “I’m talking too much”. This was just a hint of the shame she had internalized, which was that she should be seen and not heard. Chaplains can be attuned to this shame and provide safe places on which to explore its roots and nature and through positive regard and active listening help bring healing to the shame that many carry with them.

There are some valid criticisms of Bradshaw that can be made, especially from a traditional Christian viewpoint. Many Christians would argue that to try and overcome shame through greater self-acceptance does not address the deeper spiritual problem and solution to shame, but rather exacerbates the problem of shame. Some have rightly criticized him of being a bit naive regarding human nature, unable to answer why some who were raised by apparently good homes fall in to the same patterns as those raised in toxic homes. However taken as a whole I find this to be a very insightful book not only for helping those struggle with self-esteem, difficult family dynamics and personal shame but for those of us in the other chair as well.

One thought on “The Bookshelf: “Bradshaw On: The Family”, by John Bradshaw”