This came across the line from the APC and thought it was such a brilliant and simple idea. The text is included below but please access the full article here.

A ‘Spiritual Board’ Brings Comfort to the Critically Ill

When William Campion was in the intensive-care unit this month after a double lung transplant, he felt nervous and scared and could breathe only with the help of a machine.

Joel Nightingale Berning, a chaplain at Mr. Campion’s hospital, New York-Presbyterian/Columbia University Medical Center, stopped by. He saw that Mr. Campion had a tube in his neck and windpipe, which prevented him from speaking. The chaplain held up a communication board—not the kind used to check a patient’s physical pain and needs, but a “spiritual board” that asks if he or she would like a blessing, a prayer or another religious ministry. The board also lets patients rate their level of spiritual pain on a scale of 0 through 10, from none to “extreme.” 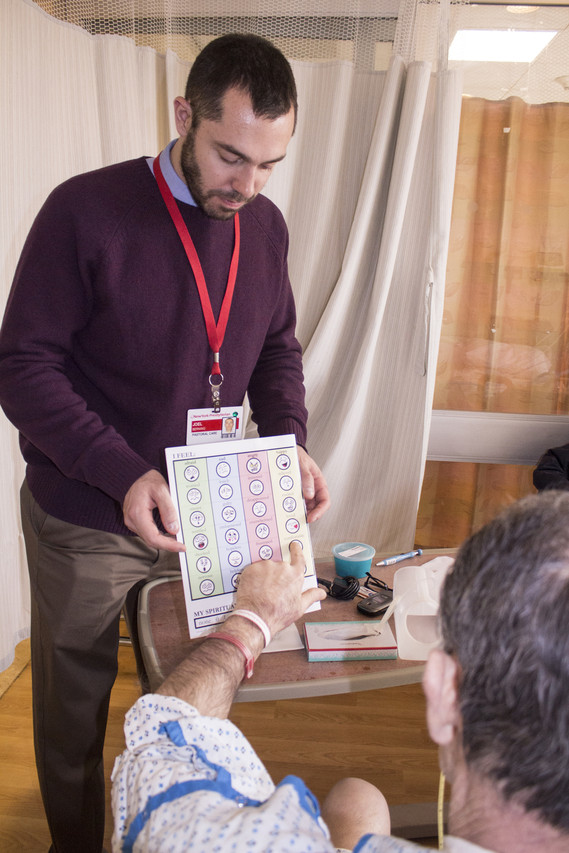 Chaplain Berning with William Campion, a patient who was unable to speak while recovering from a double lung transplant. The chaplain used the ‘spiritual-communications board’ to help Mr. Campion express himself and convey his spiritual needs. PHOTO: NEW YORK-PRESBYTERIAN HOSPITAL

Mr. Campion, a 69-year-old Catholic, indicated his spiritual pain was acute: 8. Using the picture board, he signaled that he wanted to pray. The chaplain recited the Lord’s Prayer as Mr. Campion followed silently.

“It is not ‘I am nauseous,’ ” the chaplain says of his board, which can be used by many religions. “It is: ‘I am lonely, I am scared, and instead of turning me, play some music or get me a priest.’ ” Chaplain Berning designed the board to help the most helpless patients, “who are awake and looking at you but they can’t talk.”

ICUs have evolved in recent years and even the critically ill are being sedated less than before. As doctors came to believe that heavy sedation—once the norm in such units—could be harmful, many patients are now breathing with the help of machines, and are conscious.

“We have had a paradigm shift in the last several years—more ICU patients being awake and alert,” Chaplain Berning explains. The fact that these patients can’t communicate adds to their frustration, studies show. It also has made it imperative for chaplains to try to offer them a human and spiritual connection, he says, because many patients on these machines feel “trapped.” They have been intubated, meaning they have a tube in their throat, attached to a machine that is breathing for them. 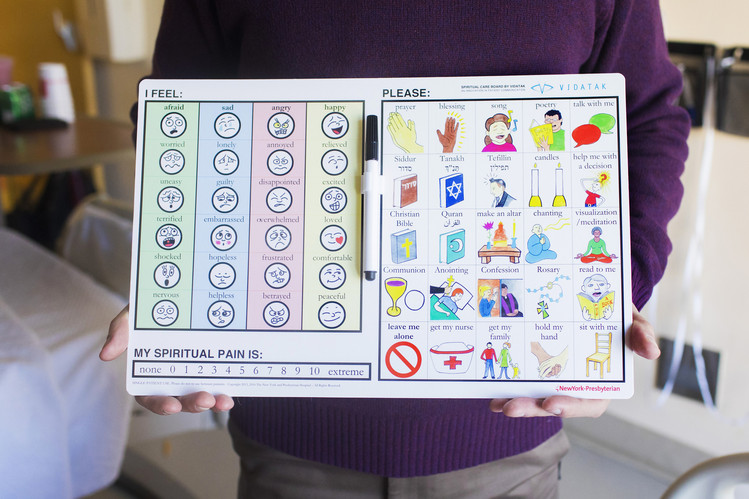 The spiritual-communications board, designed by Chaplain Joel Berning and illustrated by a fellow hospital chaplain, Seigan Ed Glassing, a Zen Buddhist monk, can be used by people of many religions and spiritual beliefs, from Christians, Jews, Muslims and Hindus, to agnostics and those who “don’t know.” The board allows patients to rate their ‘spiritual pain’ on a scale of 0 through 10 and indicate their emotional state, such as if they are sad or afraid or hopeless. Patients also can make a religious request for a prayer book or candles, or simply for human companionship. One icon indicates “Sit with Me.” Another: “Help me with a decision.” PHOTO:CASSI ALEXANDRA FOR THE WALL STREET JOURNAL

The 32-year-old chaplain, who is nondenominational, persuaded a fellow chaplain—Seigan Ed Glassing, a Zen Buddhist monk who had studied art—to help illustrate the board. The two included a range of faiths and belief systems, including Christian, Jewish and Hindu, as well as New Age, Pagan and agnostic. Colorful icons offer patients the option of a prayer or confession, or simply to have someone hold their hand. Chaplain Glassing said he loved figuring out “what would a blessing look like,” or how to draw “make [me] an altar.” A favorite: depicting someone asking to be read a poem.

The spiritual board is now being manufactured by a private company called Vidatak and a sister company, Acuity Medical Inc., under a licensing agreement with New York-Presbyterian. The companies, with offices in Los Angeles and Annapolis, Md., have sent sample boards to hospitals, with plans to market the board nationally and overseas.

Members of the ICU staff were sympathetic to Chaplain Berning’s efforts. Doctors and nurses were accustomed to seeing clergy in their unit, often administering last rites or comforting relatives of the dead or dying. The spiritual board is transforming the role chaplains have played in the ICU from “consultants for death to consultants for life,” says Matthew Baldwin, a critical-care physician at New York-Presbyterian. 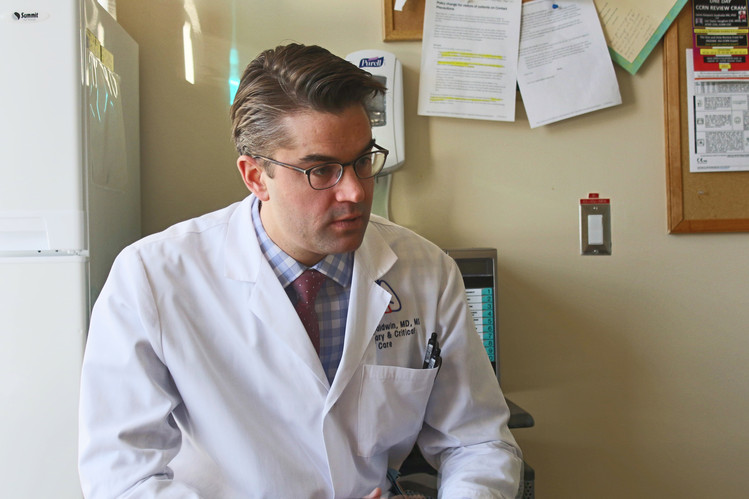 Matthew Baldwin, a critical care physician at New York-Presbyterian/Columbia University Medical Center, led a study with Chaplain Joel Berning that found that a visit from a chaplain and use of the spiritual-communications board with critically sick patients who are conscious helped reduce their anxiety. Dr. Baldwin says the role of chaplains in the Intensive Care Unit is changing, from “consultants for death to consultants for life,” as they try to help these patients both with their hospital stay and for the time they may leave the ICU and return home. PHOTO: NEW YORK-PRESBYTERIAN HOSPITAL

Dr. Baldwin, who leads research in the ICU, decided to show scientifically how spiritual intervention could help critically ill patients, if only by reducing their anxiety. He and Chaplain Berning designed a study to test the efficacy of spiritual care “as if it were a new medicine.”

The study, with results published last August in the Annals of the American Thoracic Society, looked at 50 ICU patients who were offered spiritual care through the board. Researchers measured patients’ anxiety before and after the chaplain came, concluding that “anxiety after the first visit decreased 31%.”

Among patients who survived, 81% “felt more at peace,” while 71% felt “more connected with what is sacred.” The paper concluded the spiritual intervention “shows potential for reducing anxiety during and stress after an ICU admission.”

Such findings could have broader implications for patients who recover, Dr. Baldwin says. Those lucky enough to leave the ICU suffer from high rates of depression and post-traumatic stress disorder. He wonders if addressing patients’ spiritual needs in the hospital could help after they go home.

Frank Gene LoCastro, a 48-year-old manager for a wholesale seafood company, went home recently after months in the ICU. While ill, he says, “I felt afraid, I felt sad, angry, a little worried.” He recalls using the board to signal his emotional state and says visits with the chaplain gave him strength. He prayed every day and remained positive. “I knew I was going to get happy,” he says.

Chaplain Berning’s efforts come at a time when his hospital’s chaplaincy program, along with others nationally, has extended its reach to include patients of faith as well as those who aren’t observant or believe in God, but still welcome a spiritual ministry. 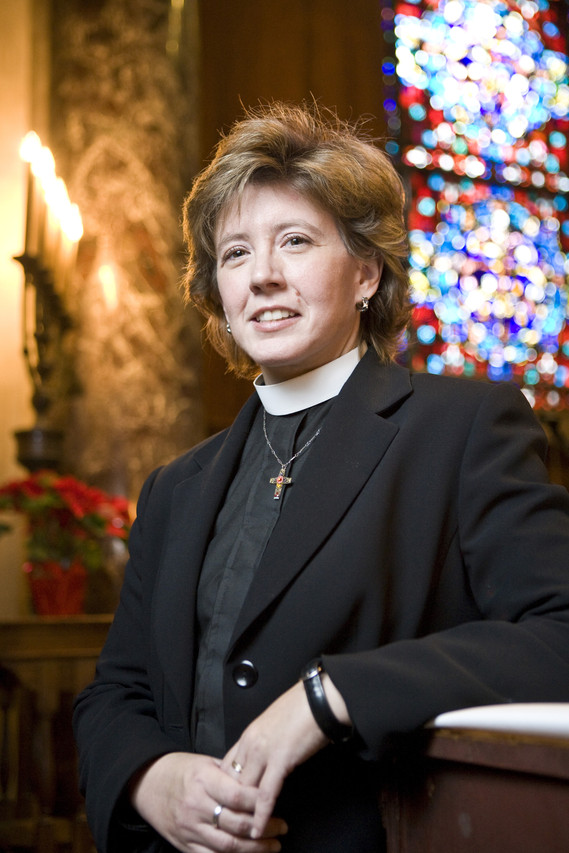 Rev. Dr. Beth Glover, who oversees pastoral care for New York-Presbyterian, says that chaplains go beyond religion and try to connect with patients of any faith and belief system, including non-believers, on a human level. Reverend Glover, an Episcopal priest, says ‘chaplaincy isn’t only about religion,’ and that many ill patients have questions about purpose and meaning. The chaplains can reach out to them and help. PHOTO: NEW YORK-PRESBYTERIAN HOSPITAL

“Chaplaincy isn’t only about religion,” says Rev. Dr. Beth Glover, who oversees New York-Presbyterian’s pastoral care. “We all have these human questions of purpose and meaning.” Her department includes Orthodox rabbis, an imam and chaplains of various religions who can connect with people of other faiths and “no particular faith,” she said.

Hospital chaplains have become more “evidence-based” and science-minded, says Rev. Dr. Daniel Grossoehme, an Episcopal priest and a staff chaplain at the Cincinnati Children’s Hospital Medical Center in Ohio. “People want data, they want evidence,” he says, and clinical trials and studies on spirituality have grown dramatically. “We have always had anecdotal evidence. ‘Your priest came and it helped.’ Now we have the numbers.” 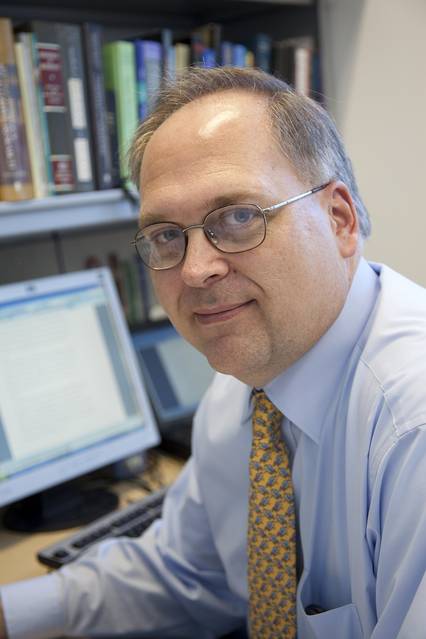 At New York-Presbyterian, Daniel Brodie, the director of the Medical ICUs, says the chaplains now also are helping nurses and doctors who feel vulnerable. “What staff sees in an ICU is unlike what anyone else sees outside of war,” Dr. Brodie said. “A patient’s suffering [at some level] becomes our suffering” and “their relief becomes our relief.” Chaplain Berning can “help the staff with their level of grieving.”

Last week Chaplain Berning stopped by to see Mr. Campion. He was seated in a chair and able to speak again, though he still had a tube in his neck. He hoped to leave the ICU.

“I feel loved,” he told the chaplain. “I feel comfortable.”

Write to Lucette Lagnado at lucette.lagnado@wsj.com