I’m actually impressed that Marvel has kept him dead this long. He’s died on at least 40 occasions after all. Granted, many of those are in alternate timelines and “What if?” titles, so you can’t really count them. But the 2014 Death of Wolverine story seems to be the first time Wolverine has died and stayed dead.

It’s reasonable to say that most readers don’t think that Wolverine is not coming back in some way in the future.  There are lots of reasons for this, but the main one is that comic book characters have a way of not being dead when they seem to be.

Very few major comic book characters have died and stayed dead. Major characters like Jean Grey, Green Arrow, Superman, Captain America, and Robin (Jason Todd) were all stone cold dead and then somehow not anymore. Writer Geoff Johns killed off half the DC universe in the Blackest Night story line and then brought them all back again. This had led to a bit of a crisis of belief among comic book readers, and now comic book movie-goers, in that none of us really believe that a character is dead unless they’re a minor character. We don’t ask if they will come back, but when and how.

Which brings me to Roy Focker. 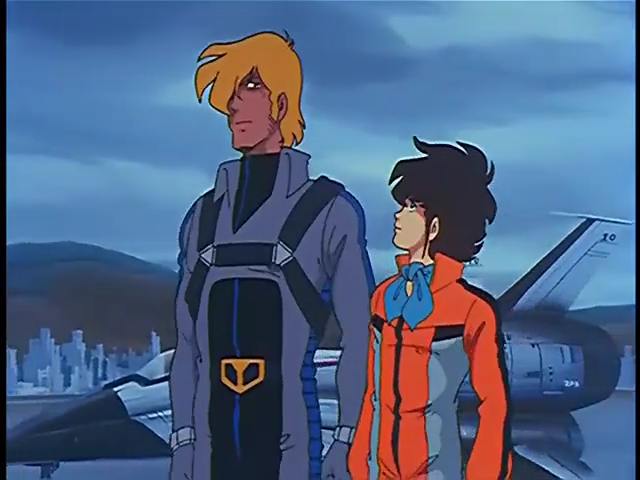 Roy and Rick Hunter from Robotech

Roy Focker was a major character in one of my favorite Japanese animated shows (or Anime) growing up, Robotech. The show featured all kinds of stuff that appealed to kids my age: big spaceships, jets that turned into robots, lots of action and things blowing up. It wasn’t made for kids per se, but the fact that it was animated automatically drew any kid to it. But the thing that really distanced this show from other popular American cartoons at the time like GI Joe was that in GI Joe when a jet blew up you saw the pilot eject to safety. There was lots of shooting without anyone ever getting shot. In Robotech when a spaceship blew up, it blew up. No ejections or survivors. They were dead.

Robotech (as I’m going to call the Macross storyline for brevity) followed the story of its main protagonist, Rick Hunter, as Earth combats the alien Zentraedi race. Roy was an ace pilot and served as not only a role model and big brother figure to Rick but as the renegade/cool guy of the series. It was a huge shock to my 12-year-old system when after 17 episodes he died after suffering internal injuries in battle. Characters wept openly, and the overall mood was sad and tragic. He was set up to be the character that couldn’t die, and he did. Rick’s character was forever changed, and in a way so was I. After all, people didn’t die in cartoons – at least people that counted. When they did die, it served only to move the story along and there was little emotional involvement beyond moving others to revenge. When Roy died, the immediate reaction was grief – real grief.

I now work as a hospice chaplain and see just how our culture handles death and dying. More often than not, it seems, we don’t handle it well. I’ve heard it said that ours is a “death denying” culture precisely because it often treats death and dying as something that happens to other people rather  than something that naturally happens to us. Death is a problem in need of a solution, rather than being something which simply “is”.

Today death and dying seem avoidable through medical intervention or sheer willpower. And when those fail then a little divine intervention doesn’t hurt either. When death does happen, it’s due to a failure somewhere in the system: the doctor, the hospital, or maybe even the patient didn’t do something that could have prevented their own death. One more test, drug, treatment or prayer could have made the difference.

Even in Christianity I see a denial of death at times, however it shows itself not as “death isn’t going to happen to me” but as “I’m going to die but it’s not going to matter because I’ll be with Jesus”. Obviously this last statement is true in a way, and it offers us a great deal of peace regarding the finality of death and our eternal place with God. The person hasn’t “died”, they’ve parachuted to safety, just like GI Joe. But it also avoids the hard reality that death does matter and that it affects us in permanent ways. Western Christianity has bought in to the idea that death is a problem which is solved by Jesus’ own death. This is absolutely true in regard to the spiritual sting of death, which is separation from God. However this does not and should not make us immune to the sting of death that comes from the separation of one from another, whether it’s the death of another or our own impending death. There is no sin at crying at a funeral, because Christ wept at the tomb of Lazarus, whom he knew he would raise again.

And by the way, if someone ever quotes the story of Lazarus to invoke the possibility that their loved one might be saved from near death, ask them where Lazarus is now. Right – he’s dead again, Jim.

In my experience, those that are accepting of the inevitability of death when it is apparent, both in themselves and when those they love are close to death, have a greater sense of peace as well as purpose during that crisis. Denying death’s ultimate reality in an attempt to avoid its morbidity actually makes it even more morbid. Perhaps our popular culture might edge us there a bit more, letting the dead stay dead. Heroes aren’t heroes because they live forever, anyway.

One thought on “Why Roy Focker’s Dead and Wolverine Isn’t (At Least Really): Death in Anime and American comic culture”